“Society of Values” President: The time of the lone leader stereotype is over

“Society of Values” President: The time of the lone leader stereotype is over 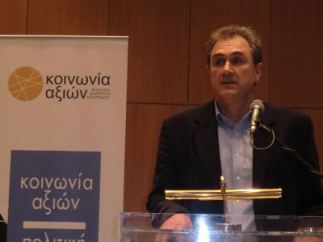 Multi-fragmentation and the absence of a clear and coherent political message that combines liberal ideas with social policies are the two major problems that the Greek liberal-centrist parties must address in order to create a strong political force in Greece, according to Mr. Stelios Fenekos, President of the social-liberal party “Society of Values” (Koinonia Aksion).
Speaking with Greek Liberal Monitor, Mr. Fenekos stated that Greek Liberal parties must make the citizens understand that liberal ideas are not only just economic liberalism but that they concern the society in its entirety, day to day life of citizens and participation in the policy making. He discussed the possibility for closer cooperation with ALDE and liberal parties from other countries and revealed his ideas on the future of his party. “Society of Values” must either grow or make alliances with other liberal centrist parties”, he said.

We have a new government in Greece and this time it’s a pretty unlikely alliance between the far-left (SYRIZA) and the far-right (ANEL). What is your opinion about this alliance and what do you expect to come out from it?

I will not judge SYRIZA according to their pre-election statements, because all the political parties In Greece during the pre-election period express their policies with some maximalism but when you are called to manage the country it is natural to become more rational. I will judge SYRIZA in regards to their decisions after the elections and in relation to the total ideological profile. SYRIZA’s intentions for the social life at their base are good. As a new popular government it aims to implement policies such as a war against corruption, tax fraud, and an ingrained client like relation between state and the citizen. These are all issues that all previous governments vouched to do but failed and this time we see a new party in government with political personnel which lead a frugal life and try to cut expenses. This is a positive first step. But there is also a huge weakness, which lies in SYRIZA’s inexperience in the international political environment. In my opinion, its messianic and sometimes aggressive rhetoric and the way they managed the deal with the EU, the ECB and the IMF so far, by creating a huge problem worldwide and then landing in reality, resulted in the Greek Government losing some of their bargaining chips and precious time. What I would expect from the new Government, in their first steps, to request assistance from technocrats that have experience and understand the international environment and could help with the negotiations. In regards to the cooperation with ANEL, it was personally as a surprise. We have not seen their inherent contradictions yet but these are sure to arise over time and on multiple political issues.

“Society of Values” like most Greek parties of centrist-liberal views did not participate in the last elections. Why did this happened?

Talking about the broad centrist political spectrum as it is expressed by ALDE, which we could say is the European “umbrella” party which includes in its ranks parties from the centre-left all the way to classical liberals, in Greece there are two major issues. The first major issue is the absence of a coherent message that could combine liberal ideas with the social policies that many centrist parties represent. The second major issue is the multi-fragmentation of the centrist political scene with many small formations, all of which have their visions on how to move forward, but which are not willing to take a “step back” and create a larger political union that could gather the amount of votes required (editor’s note: 3% of the public vote) to enter the Greek Parliament. We are learning through our losses and I strongly believe that this was our last defeat. There will soon be a strong centrist coalition that will unite not only the many small parties but also the true centrist parts from the other major parties like New Democracy and PASOK.

There is a constant absence of Greek Liberal parties from the political scene. Is there room for liberal ideas in Greece?

There is a major issue in regards to the manner in which we communicate our ideas. We must make the citizens try to understand that liberal ideas are not only economic liberalism but that they concern the society in its entirety, day to day life of citizens and participation in the policy making. In order to achieve this we need to use simple, coherent and clear messages but unfortunately until now Liberal parties have used very intellectual and stiff speech in a manner that created many ambiguities. So we need a clear message that will “marry” liberal ideas with the social “face” of the centrist parties and will provide simple solutions to everyday problems of the Greek citizens.

Many could argue that the role of the centrist parties is to create alliances bridging the gap between the left and the right. In order to achieve this centrist political forces should be uniting but this is not the case in Greece.

That’s true. There are two reasons. The first reason is the idea that “I belong to a party”. This idea is what has made political parties compete for ideological supremacy, pitting one against each other. The second reason is the many individuals that believe that they have to lead the centrist political field. I believe that the era of the lone leader stereotype is over, and we need to create leading groups and trends that will combine their efforts. This is our hope.

What do you expect from your European partners?

Brussels are the center of political life in Europe and the European political forces expect local political parties to give them information regarding the local problems but this communication must work in reverse as well. European parties must help the countries and local political parties move towards modernizing their policies, to exchange ideas and suggestions and help local communities to see the bigger picture because in fact someone who lives in Greece (for example) cannot see all the developments in Europe. For instance, I would expect more interaction, of the ALDE Party with local parties by organizing many common events that could empower the communicative perspective of the Greek liberal parties with the Greek citizens, the communication between the various leading groups and the organization of the centrist political field in order to become competitive against the existing parties.

What are the next steps and targets for “Society of Values”

We have prepared practicable proposals and policies on many subjects and we will be submitting them to the government because we believe that the institutional role of a political party does not depend on whether it has entered the Parliament. A political party that expresses thousands of voters, is required to submit its proposals. We have already proposed policies on the fight against corruption, on the modernization of judiciary and correctional / punishment system and we have appointments with ministers on other issues. However, this is not enough. Society of Values must either grow or make alliances with other centrist liberal parties in order to create a strong centrist political force in Greece, actually a cohesive third pole and this is the direction that we want to move towards.